Good weather, good sightings and my return to the water 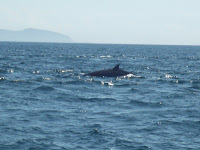 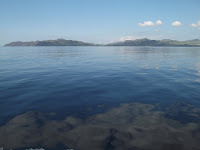 Well as I mentioned last time I couldn't wait to get back out on the water and I have now managed that. I will tell you more about my trip later on, but first about the last few weeks in general.

At the minute I am sitting in the office watching the heavy grey clouds and drizzle, a dramatic difference to the lovely calm, clear weather we have had for the last couple of weeks.

This has greatly increased the sightings with most days bringing both Basking Shark and Minke Whale sightings from at least one trip. The sighting areas have been very different so far this season though. Last year we were very lucky in that we had regular Basking Shark and Minke Whale sightings within an hour or so of Tobermory, this year however they are tending to be a bit further out, also the number of Basking Sharks seen in one day has dramatically decreased, whilst we are always very relieved that these species return there does seem to be quite a difference this year. However we can only speculate as to whether it was the unseasonably bad weather in May that has brought about this change.

There have also been sightings of Dolphins in the last couple of weeks. July was in fact kicked off with a sighting of Orca in Sanna Bay on the 1st, they have also been seen again around Staffa on the 14th. A single Risso's Dolphin and a pod of Common Dolphins were both seen on the 9th.


One species that has been missing have been the Common Seals, usually resident around Calve Island. These animals, the smaller of the 2 Seals species we see give birth around June, they prefer to do this in quieter waters and are absent for a few weeks returning later on in July with their young pups in tow.

Sea Eagle sightings have been sporadic, as previously mentioned they have no young to rear this year so seem to be making the most of the freedom and we think they are probably spending more time on the Ardnamurchan peninsula, having seen them crossing the water between Ardmore Point and Kilchoan on a number of occasions. There have been no out of the ordinary bird sightings in the last couple of weeks, but there are still lots of Puffins around and Common Guillemots with their young. Also Bonxies and Arctic Skuas, Arctic Terns, Gannets and Storm Petrels to name a few.

Well back to my day out. Wednesday dawned bright and calm, but relatively quiet on the trip booking front. However the good weather brought out the people and we soon had a boatfull, 2 families 11 people in total, all French, time to rely on my long ago GCSE's! We set out via the waterfall, Salmon farm and Ardmore point. Apart from 1 or 2 Seals and a few birds it had been quite quiet. We headed out towards Ardnamurchan and then Paul made the decision to head across to Coll. On the way we saw a huge splash, presumably a breaching Basking Shark. We then arrived at the Cairns of Coll just North of the main island. We then started searching the tideline and soon I had seen my first Minke Whale, it was heading straight towards and we stopped the boat and watched as this quite large individual surfaced less than 30 metres away it then swam behind us and surfaced 20 metres away on the other side of the boat. It seemed intent on foraging which meant that we had a very good view and it stayed nearby for around 20 minutes, we were even lucky enough to get that unmistakable whiff of whale breath. We then stopped to serve tea and coffee and it was at this point that there was a shout from the passengers, I looked behind the boat and there was a Basking Shark trawling the surface. After we'd seen this individual for a while it was time to start heading back, halfway between Coll and Ardnamurchan there it was again the whiff of Whale. This was another large animal and although seen only briefly we got another good view and as we were waiting for it to reappear we had another encounter with a Basking Shark. A fabulous day all round, hopefully it won't be as long until I'm next out on the water
Posted by Explore Mull at 05:35