We are still to get our first Whale sighting of the year from any of the trip boats, but we are having sightings reported by the fishing boats so they are definitely out there somewhere! One of the main reasons is that the island seems much quieter than at the same time in recent years, which means there are less trips going out and recently all the interest has been in the short trips; up to 2 hours, and it is always highly unlikely that you will see a Whale in a trip this short as you don’t get the chance to go out far enough. We do have a couple of Whale watch trips running this week so you never know what will occur.

One species that has been seen on a regular basis already this year is the Bottlenose Dolphin with 16 sightings being reported to the Hebridean Whale and Dolphin Trust since the end of March.The group seems to consist of about 6-7 animals and they have mainly been frequenting the West coast of the island from Calgary Bay and Treshnish headland down to the Sound of Iona with a single sighting off Duart Bay south of Craignure. They have as yet bypassed Tobermory, however every year we get a few sightings in the Bay itself.

Bottlenose Dolphins can be seen in the waters around Mull at any time of year however the only 2 confirmed resident populations are in Cardigan Bay in Wales and the Moray Firth in eastern Scotland. Research by the Hebridean Whale and Dolphin Trust though has identified that there is a group of 30-40 individuals that stay in the waters between Skye and the Mull of Kintyre and that there is a separate population off the island of Barra consisting of about 12 individuals. It is through photo identification projects run by HWDT’s survey vessel and through incoming pictures that they have been able to identify these groups. 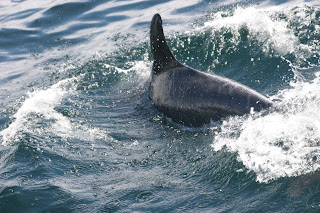 With a range of well over 100 miles it is impossible to predict when the Dolphins that pass our waters will turn up, however with many sightings already this year and the seemingly early arrival of the Mackerel it might mean that they will hang around for a while. Now all we need is for the Minke Whales and Basking Sharks to join the party.
Posted by Explore Mull at 03:23