Do you recognise these images from anywhere? The answers to our New Year Quiz are featured in the following two blog posts :- 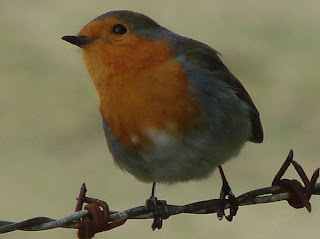 
Referred to as the ‘Nightingale That Sang On Breadalbane Street’, the cheeky and cheery Robin is one of only a few local birds that sing throughout the year. Heard accompanying drunken late night revellers, as they make their way up Prison Brae in Tobermory, the Robin is often disturbed into song during the dark nights of Winter. Robins possess large eyes for such a small bird and additional sensory receptors (rods) in their retinas that allow them to see and forage in the dark, long after other birds have gone to roost – 28/10/11 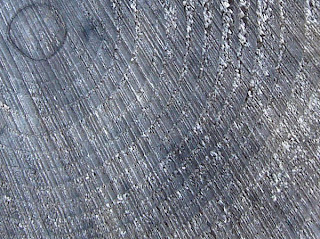 Of Choice and Over Here


The Sitka Spruce, a native of high rainfall areas in Western North America, is well-suited to life on Mull and is the conifer of choice of local forestry operators. When felled for commercial purposes, each tree reveals a series of internal rings of woody tissue, from which it is possible to gauge its age, as well as the differing environmental conditions that the tree experienced during its life. These annular rings provide a fascinating insight : during poor growing seasons the ring that develops will not be as thick as one produced after a good season. The rings on this tree are of a similar girth, suggesting that the growing seasons on Mull during its lifetime were remarkably similar and without great fluctuation – 10/07/11 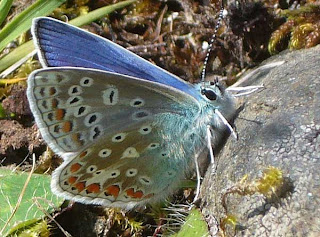 Delicate and In Decline


As the only ‘Blue’ butterfly on Mull and Iona, the Common Blue (this is a male) is easily identified. It has suffered a long-term decline and numbers emerging in Spring have greatly fluctuated in recent years. These delicate insects are as highly sensitive as they are beautiful and have evolved specialised adaptations to aid their survival. The large eyes are made up of thousands of tiny lenses, which supply the insect’s brain with a compound image of the world in which they live. Although short-sighted, they are well-equipped to detecting movement (of predators and rivals) and manoeuvring rapidly in flight – 18/06/11 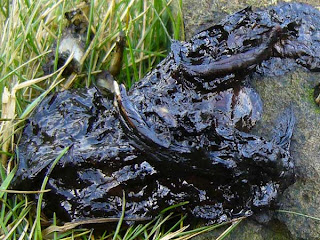 
The Isle of Mull and Iona has a very healthy population of Otters. It has been suggested that as many as 120 territories are to be located around the Isle of Mull’s 305 miles of coastline alone. That a single territory may only be around 1 mile in length when conditions are good also suggests that the islands’ may offer scope for some expansion! An Otter’s calling card is its spraint, which is defaecated at strategic points in its territory, signalling a warning to other animals that this area is inhabited. Spraints decompose relatively quickly in the Mull and Iona climate, but are characteristically black and tar-like in consistency when fresh – 29/05/11 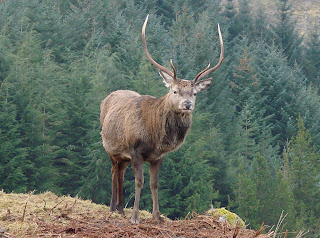 A Deer Price To Pay


Recent Winters have taken their toll on the Red Deer population on the Isle of Mull. Weak and sickly animals that may have survived previously were culled by the inclement weather and those that survived did so in a poor state of condition. However, this was good news for eagles, buzzards, ravens and crows on the island, which were served a welcome treat to help them get through the worst that Mother Nature could throw at them during the cold, dark days of Winter – 08/11/10